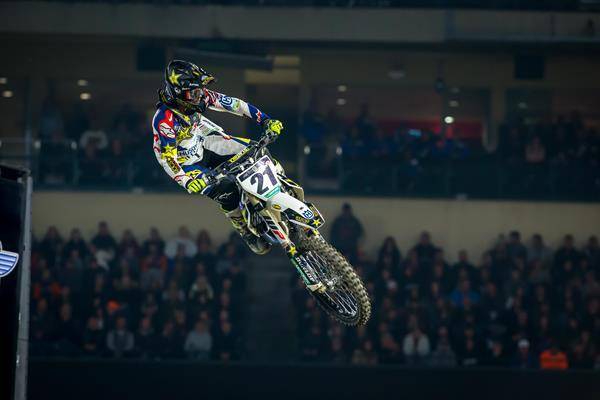 The 2018 AMA Supercross season kicked off on Saturday at the legendary Anaheim 1 race held at Angel Stadium in Anaheim, Calif. Multiple format changes are present this season as we say goodbye to the 450 semis and hello to a brand new metal starting grid, an additional shootout round, and three triple crown rounds. The Rockstar Energy Husqvarna Factory Racing Team has a new face with the addition of Mitchell Harrison, racing the 250SX West Region. Michael Mosiman returns to to race the 250SX East Region, while 450 riders Jason Anderson and Dean Wilson are back to battle the stacked 450 class. Anderson had a successful opening night as he claimed the first 450 heat race victory and finished a solid second in the Main. Teammate Harrison fought back after a frustrating heat race in the 250 class, while Wilson was forced to sit the night out after a bad crash in his 450 heat.

Round one of the 2018 AMA Supercross Championship marks the beginning of a strategic global partnership between Husqvarna Motorcycles and MOTOREX. All new Husqvarna models – both offroad and street – will be first filled with MOTOREX lubricants. In addition, the Swiss manufacturer has become an official partner of Rockstar Energy Husqvarna Factory Racing, supplying their comprehensive range of lubricants, care and maintenance products to Husqvarna’s official Supercross, Motocross, Enduro and Rally teams.

Jason Anderson was second at the start of the first 450 heat race and made the move for the lead in the second lap. He fought with Cole Seely for position and battled in the top three in lap 2. He got into the lead shortly after, pulled a gap, and claimed the first 450 heat race victory of the season to transfer directly to the 450 Main Event. He was seventh at the start of the 450 main and worked his way up to fifth by the second lap. He stayed focused and held his ground as he battled and passed Weston Peick for fourth in lap five. He moved into third after leader Eli Tomac went down and set his sights on moving into the top two with 10 minutes to go. He was on the move and hunted down Justin Barcia down second before making a clean inside pass for the position with seven minutes to go. He continued to set a blistering pace and consistently improved his time with each lap. He ended the night with a second-place finish.

“This was a rather smooth day,” said Anderson. “I was able to get a good start in the heat race and then got the win there. Then I was able to make some good moves in the main and work my way up to second. I think it was a good opening round and it puts me in a good position for the rest of the season.”

Mitchell Harrison was fourth at the start of the first 250 heat and was on the move. He fought for position with Sexton with three minutes to go but held his ground. He maintained control of the position before getting taken out after another rider slammed into him. He finished 19th and would have to earn a spot in the main through the 250 LCQ. He was third at the start of the 250 LCQ and quickly moved into second. He stayed steady to finish second and transfer to the 250 Main Event. He started in the back of the pack in the 250 Main Event and steadily moved through the pack to finish 14th.

“It’s good to get the opening race jitters out of the way,” said Harrison. “I had some bad luck in my heat but I’m looking forward to redeeming myself at the next round.”

Dean Wilson was top-10 at the start of the first 450 heat race and was in fifth by the end of the first lap. He went over the bars in the rhythm section in the second lap and was unable to finish the race. He decided to sit the rest of the night out and hopes to return next week in Houston.

“I was so ready for this race,” said Wilson, “so it’s unfortunate that my night turned out like this. All I can do is be positive, take care of myself, and get ready for the next round."